Emily was married at the age of 18 and has lived with fistula for 14 years. It was during her 6th pregnancy that Emily went into labor and was taken to the nearby health centre, but her pregnancy was complicated and she was referred to the district hospital where she was operated and sadly lost the baby.

After being discharged Emily noticed she was leaking urine. She had visited many different hospitals, but she never received treatment.  Emily was then forced to live a very lonely and depressed life, as she was not accepted by her community because of her condition and therefore spent most of her time indoors and relied on her husband and children to support and care for her.

Emily got a visit from a patient ambassador in 2014 were she was brought to the Fistula Care Centre in Malawi, where she received treatment and was cured in the same year. Emily is now fistula free and is a very happy as she can finally have her old life back.  She is no longer an outcast and the centre of attention in her village and can finally interact with those in her community without being ashamed.

During her stay at the centre Emily attended the educational classes. She was especially fond of the numeracy, literacy and business classes.  She gained new knowledge and uses it run her businesses.

In 2017 Emily received a solar charging station that she uses to charge phones. On an average day she makes MK 100 to MK 250.  Most people in her village have solar units and she gets a few customers who come to charge their phones at her home. Since receiving this she has made MK 220, 000, which she used to pay off her solar loan and to purchase 3 piglets. She now has 16 pigs and sells the meat to the local people. She also uses the same money to support her household.

In 2019 Emily was selected to be one of the former patients to be making reusable sanitary pads in her home district as there is a need for them. She received a manual sewing machine and some start up materials. So far, she has made MK 70, 000 from making pads and MK 23, 000 from making clothes. Emily sells her pads in schools and women gatherings.  She has saved the rest of her earnings in the village bank in order to one day build another house for her family.  Currently she is learning how to sew clothes and hopes that by the end of the year she will be able to cut and sew clothes.

After Emily was discharged she felt the need to help other woman that faced the same problem she had. She started sharing about her experience during women gatherings. Emily was trained in 2018 as a patient ambassador and she received all her training materials to use to raise awareness about fistula in her community.  So far has brought 11 patients, all of whom have been cured.

Emily’s dream is to expand her farm by buying various animals such as cows and chickens.

“I never thought I could gain so much from suffering from fistula. In a way this has been a blessing to me because I have a few businesses that the Fistula Care Centre made possible for me.   I am grateful to Freedom From Fistula for all the things they have done for me and for curing me.  I am fistula free and I have peace in my life. Please continue the good work you are doing, you have transformed my life. God bless you always” 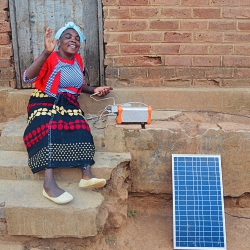