Elizabeth was married at the age of 22 and has suffered with fistula for 7 years. During her 2nd pregnancy Elizabeth faced challenges after following all the right procedures until the time she went into labour. The doctors operated on her and were able to save her baby but unfortunately her uterus was badly damage and had to be removed.

In 2014 Elizabeth’s husband moved to South Africa leaving her to care for their 2 children. Though her husband was still supporting her from afar she still felt so alone, as she was embarrassed and ashamed of her conduction.  Elizabeth’s family took her to various hospitals, but she never was treated.  It wasn’t until 2017 where the district hospital referred her to our Fistula Care Centre where she was operated on and cured.

During her stay at the centre Elizabeth was very active. She spent a great deal of time interacting with other patients and sharing experiences.  She also enjoyed attending the centre’s patient activities such as arts and craft classes and the cooking classes. She has since used these skills to make crafts which she sells in her village and also to make nutritious meals for her children.

After being cured Elizabeth is happy to be able to do the things she missed such as attending church and interacting with the members of her community. These things might seem small to others, but they were significant in Elizabeth’s case as it gave her a sense of belonging.

In 2017 Elizabeth received a solar charging station that she uses to charge phones. Since receiving this she has made MK 30, 000, which she uses to take care of her children and household.  Her solar loan was paid by her husband.  it is very difficult to make money from charging phones as her community has electricity.

In 2019 Elizabeth was also selected to be one of the former patients to be making reusable sanitary pads in her home district as there is a need for them. She received a manual sewing machine and some start up materials. So far Elizabeth has made MK 250, 000 from making pads and clothes for women, men and children.  Elizabeth partnered up with her brother who is a tailor by profession and has been teaching and training her. They have since opened up a shop at the local market.  Together they are making uniforms for church choirs and schools and also pads for schools when they order.  Elizabeth is happy her business is booming she is now able to put her children in school and has even purchased bricks to build a safe and secure house for the family. She feels anything is possible and is so grateful that she was one of the lucky women to be picked to receive a sewing machine; it has really transformed her life for the better. Something she never thought was possible when she had fistula.

After she was discharged Elizabeth felt the need to help other woman that faced the same problem she had.  She started talking at community gatherings and sharing about her experience as a fistula patient and encourage the people who have this problem to come fourth, so they can receive treatment at the centre. Elizabeth was trained in 2018 as a patient ambassador and she received all her training materials to use to raise awareness about fistula in her community. So far, she has brought 3 patients, all of which have been cured.

“I am very grateful to the fistula care centre for all the things they have done for me. I am fistula free and I have been empowered by the centre. I am an independent woman who can support my family and I will never be poor again.” 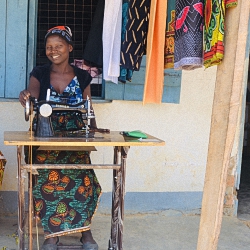