Corida got married at the age of 20 and lived with fistula for 10 years. Her fistulas developed in 2004, during her first pregnancy where she had a complicated pregnancy and did not reach the hospital in time. By the time she reached the hospital it was too late, and the doctor could not save the baby. A few days later after being discharged Corida noticed she was leaking urine. Whilst living with fistula Corida gave birth to 2 children who both survived.

However, during her 3rd pregnancy Corida went to the traditional midwife in her area and was in labor for 3 days before going to the nearest hospital. Unfortunately, by the time she got to the hospital it was too late to save the baby and due to her obstructed labor she also developed 2 types of fistula (RVF and VVF).

In the 10 years she had fistula Corida visited various hospitals and was never treated for her condition. Sadly, her first husband passed away and left her to raise the 2 children they had together by herself. After a few years passed, Corida got remarried to a man who accepted her the way she was. Her new husband was supportive and encouraged her to keep hoping that one day she would be cured of her condition.

Before coming to the Fistula Care Centre Corida lived a very miserable life, her condition meant that she was not able to conduct any business, attend church or any other community activities. In 2014, her prayers were finally answered as she was referred to the fistula care centre where she was treated and in 2015 was operated on twice to treat both fistulas. After being repaired things changed for Corida, she was no longer an outcast in society. She has since given birth to a beautiful daughter who is now 3 years old and is going to school.

In 2017 Corida had the privilege of receiving a solar charging station. On an average day she charges 4 to 5 phones and she charge MK 100 per phone. On a good month Corida makes MK 15,000 to MK 20,000. So far, she has made MK 151, 000 just from charging phones. Corida has used the money to repay her solar loan, feed her family and pay school fees for her children.

In 2019 Corida was selected to be one of the former patients to join the reusable sanitary pads program set up by FFF to help patients reintegrate back into society after their surgeries and provide income-generating opportunities for them. By making reusable sanitary pads in her home district, where there is a need for them, Corida is able to prevent girls in her community from suffering from infection and disease. She received a manual sewing machine and some start up materials. So far Corida has made MK 20,900 from making pads and MK 6,100 from making clothes. Although, she is finding it difficult to sell the pads as most women in her community cannot afford them as they have to feed their families first. She is currently learning how to sew clothes and she is being taught by a local tailor in her village who is charging at a fee for the lessons. Corida is hoping to make more money from making clothes and she wants to use this money to run her own animal farm.

After being discharged from the centre, Corida and her husband started helping by bringing patients to the centre. Both Corida and her husband have been trained as patient ambassadors and received all the necessary materials to conduct fistula awareness in their community. As a family they also received a bicycle which they use to search for fistula patients. This has allowed them to bring 25 patients so far, all of which have been cured.

In my life I never thought I would be cured from fistula, but today I am. I am so thankful to the fistula team for curing me from fistula. You have really transformed my life. I would have not been alive if it wasn’t for FFF. 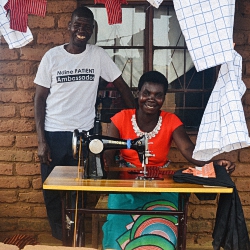