Eletina went into labor and was quickly rushed to the nearby health center where she stayed in labor for a day. The doctors tried to operate but they were not able to deliver her baby, so they referred to the district hospital. Unfortunately, by the time the doctors operated on her it was too late, Eletina had lost the baby.

Eletina was discharged and a few days later she noticed she was leaking urine. During the year she had fistula she visited various hospitals, but was not helped. During a visit to the central hospital she was referred to our fistula care center where she was operated and cured from fistula.

When she arrived at our center, Eletina had low self-esteem and lacked confidence due to her condition. She was ashamed and embarrassed. To make things worse her husband left her for another woman. Eletina was depressed and felt utterly alone.

Since being cured Eletina tells us she feels at peace. She is now waking up to a dry bed and does not stress about having to wash her bedding every day. She feels she is part of the community again. She has also remarried. At the center, she was happy with a lot of the activities, but her favorite was the cooking demonstrations classes. When she returned home her new husband gave her some capital to start her doughnut business, the profits of which she has used to take care of her family and invest in another business.

Eletina wants to buy land and build a house.

"I'm grateful for all the things FCC team has done for me. You have given me a fresh start. You gave me courage to be an independent woman. You brought value to my life. THANK YOU.” 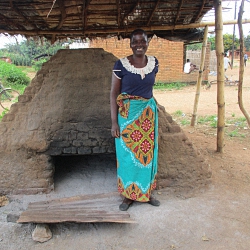